I appreciate readers and their comments... I really do.

A note appears when you indicate that you going to comment on a post I have made which provides guidelines for you to consider as you comment and for me as I moderate those comments.

But alas those guidelines seem not to be taken seriously or perhaps they are not actually even being read by would be commenters.

I would publish more of them if indeed there was actually some semblance of those simple guidelines being followed.

I will re- post those guidelines here to emphasize my commitment to approve based upon them.

Note, I have emphasized the portion which is most often ignored.

LDL Particle Size and Particle Number, What Gives?
Ron is a 72 year old retired engineer, and has a total cholesterol of 174 which hasn’t changed over the seven years we have been following him. This is quite low. Yet, Ron is concerned because his LDL particle number and LDL particle size are “outside of the lab range”.  He is very worried about this and is concerned about his risk for future heart attack.  I explained to Ron the lab range doesn’t apply to him.  Ron’s Calcium Score is low, and his total cholesterol is 174, and he does not have metabolic syndrome or diabetes, so he doesn’t need to worry about the LDL particle size or particle number.
What does the mainstream cardiology say about the value of LDL particle size and number?
The Quebec Study – Small Dense LDL Associated with Increased Mortality from Coronary Artery Disease

Why I won’t take statins for my high cholesterol - Julianne

Why I won’t take statins for my high cholesterol


In Summary, for those who took the statin for 5 years (with known heart disease):


Benefits in NNT
Harms in NNH

If you have had a heart attack and change your diet to a Mediterranean diet – you will get far more benefit than Statin drugs:

In Summary, for those who adhered to the Mediterranean diet:

Benefits in NNT
Harms in NNH

Statins in the Drinking Water? - Packer

Statins in the Drinking Water?

"Universal treatment for people at minimal risk means that a physician would need to treat more than 100 patients for 10 years to obtain an extra year of good health in one person. This marginal improvement does not meet most current standards for cost-effectiveness. The benefit is so small that it disappears if quality of life were even slightly diminished by the need to remember to take the drug daily."
.
.
.
.
"Treating every middle-aged person with a statin is the polar opposite of precision medicine.
Confused? You should not be. It is medicine that has gone insane." 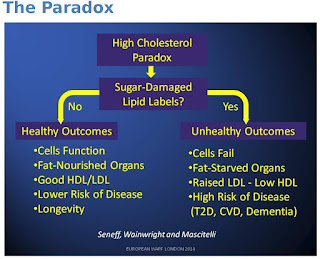 Our review found that cholesterol lowering therapies were implicated in:


We have found compelling evidence that cholesterol-sulphate is vital to good vascular health so the question is..... Why would anyone want to lower cholesterol? What is needed is a lowering of damage to lipids - caused by sugar.

The Elderly on Primary-Prevention Statins: No Survival Gains in ALLHAT - Medscape

The Elderly on Primary-Prevention Statins: No Survival Gains in ALLHAT

CHICAGO, IL — Statins for primary prevention do not lower the risk of death, whether cardiovascular or from any cause, when given to people aged 65 years or older with CV risk factors, suggests a secondary analysis of a major trial that caused a stir 15 years ago[1].
The ALLHAT-LLT trial had randomized >10,000 people aged >55 with dyslipidemia and hypertension but no clinical heart disease to receive open-label pravastatin 40 mg/day or usual care. In its 2002 publication[2], the trial famously saw no significant mortality reduction for the statin after 6 years, nor an improvement in fatal or nonfatal coronary heart disease events.

The results were similar in the new post hoc analysis of the trial focusing on the 2867 participants aged 65 years and older, as a whole and by the two age groups 65 to 74 years and >75 years, according to a report published May 22, 2017 in JAMA Internal Medicine with lead author Dr Benjamin H Han (New York University Langone School of Medicine, NY).
Although no significant outcomes differences were seen between the two randomized groups in any of the age categories, there was a trend (P=0.07) for increased all-cause mortality on the statin in the oldest age group.


As Han pointed out for heartwire from Medscape, the overall trial had well-recognized limitations. For example, the statin was given on an open-label basis. Also, it has been long noted that the ALLHAT-LLT usual-care group could receive statins at the physicians' discretion, which could potentially blur any differences in treatment outcomes.

"I would be very cautious in drawing any real conclusions from this study, as the study was not specifically designed to study statins in older adults, so all of the analyses are underpowered. None of their major conclusions were statistically significant," according to Dr Ann Marie Navar (Duke Clinical Research Institute, Durham, NC), who isn't connected with the ALLHAT-LLT report.
"Most statin trials have shown no difference in mortality, but [they showed] that statins do reduce the risk of coronary heart disease, a trend also seen in this secondary analysis," Navar told heartwire by email.

The Issues
"We are seeing a lot more older adults being put on statins for primary prevention, but the problem is, the evidence for doing so is limited," Han said.

"As geriatricians, we emphasize that treatment recommendations really need to be individualized with patients and need to also take into account not just what their cardiovascular risk is, but what their life expectancy is, what other competing risks they may have, and what their functional status and everyday activities are," Han observed.

Moreover, "for older adults, taking another medicine every day for the rest of your life isn't a small thing, especially if you have other chronic conditions, and right now we don't have any evidence that there's any benefit to doing so if you do not have any history of cardiovascular disease."

An editor's note accompanying the ALLHAT-LLC report points out the potential risks of extending statins to groups that may be unlikely to benefit clinically[3]. For example, statin therapy may be associated with myopathy, myalgias, muscle weakness, and arthropathies, notes Dr Gregory Curfman (Harvard Medical School, Boston, MA).

"These disorders may be particularly problematic in older people and may contribute to physical deconditioning and frailty. Statins have also been associated with cognitive dysfunction, which may further contribute to reduced functional status, risk of falls, and disability," he writes.

"The combination of these multiple risks and the ALLHAT-LLT data showing that statin therapy in older adults may be associated with an increased mortality rate should be considered before prescribing or continuing statins for patients in this age category."

Is There a "Point of No Return"?

"It takes decades for the plaque to build up in the arteries that eventually causes strokes and heart attacks. Data from thousands of adults studied in clinical trials show us that statins, when started early, can interrupt or slow down that process," according to Navar.

But, "we don't know if there is a 'point of no return' where it's too late to start a statin, and ALLHAT was not designed to answer that question. We need a large randomized trial to really know how effective statins are when started in older adults without cardiovascular disease," she said.

"There is a lot of negative press about statins, and I really worry about the effect of studies like these on the public's perception. This study was a secondary analysis of a trial that was not designed to study the effect of statins in older adults," Navar observed.

"Data from thousands of adults in multiple randomized trials have shown that statins prevent heart disease and do not kill people. I hope that the media, in the never-ending search for clickbait, doesn't overemphasize the statistically nonsignificant mortality trend and lead people who are known to benefit to discontinue their statins."

The study was funded by the National Heart Lung & Blood Institute. Study medications were contributed by Pfizer, AstraZeneca, and Bristol-Myers Squibb, and financial support was provided by Pfizer. The study authors and Curfman report no relevant financial relationships. Navar reported research support from the National Institutes of Health, Amgen, and Sanofi & Regeneron Pharmaceuticals and serving as a consultant for Amgen and Sanofi.
Read the full article here.
Posted by wmodavis at 5/26/2017 10:32:00 AM No comments:

Although the cholesteryl ester transfer protein inhibitor evacetrapib had favorable effects on established lipid biomarkers, treatment with evacetrapib did not result in a lower rate of cardiovascular events than placebo among patients with high-risk vascular disease.

It’s official, statins do not have any side effects - Kendrick

It’s official, statins do not have any side effects

"The reality is, that unless you have had a previous heart attack, statins have no effect on overall mortality. To put that another way, they don’t save lives. They don’t even prevent heart attacks or strokes in women with no previous history of heart disease.

The statistic you really want to know about statins is the following. If you have had a heart attack, or stroke, and take a statin for five years, you will increase your life expectancy by 4.2 days. Balance that against a twenty per cent chance of having side effects, some of which are very unpleasant and long-lasting, and you can see why I am not a fan of statins."
.
.
.
"A number of things were found. The most important of which, is just how many people stopped taking their statins after one year. A pretty staggering 75%. Why did they stop?

How much longer will you live if you take a statin?


"Looking at the Heart Protection Study (HPS) done in the UK, we used a technique for analysing survival time called RMST (restricted mean survival time). I won’t go into the details. The HPS study lasted for five years, and we calculated that the average increase in survival time was 15.6 days. This was at the end of five years of treatment (with a confidence interval of 5 days either side). For 4S, the figure was 17 days."

"Framing this slightly differently, what this meant was that taking a statin for one year, in the highest risk group possible, would increase your life expectancy by around three days."

"However, more recently the BMJ did decided to publish another paper entitled: ‘The effect of statins on average survival in randomised trials, an analysis of end point postponement.’


Conclusions: Statin treatment results in a surprisingly small average gain in overall survival within the trials’ running time. For patients whose life expectancy is limited or who have adverse effects of treatment, withholding statin therapy should be considered
Overall their findings were far less impressive, even, than ours. They calculated, approximately, a single day of increase in life expectancy for each year of taking a statin. Slightly more in secondary prevention, slightly less in primary (people who have not previously had a heart attack or a stroke).
The main take away message I believe, is the following. Statins do not prevent fatal heart attacks and strokes. They can only delay them. They delay them by about one or two days per year of treatment. For those who have read my books you will know that I have regularly suggested we get rid of the concept of ‘preventative medicine’. We need to replace it with the concept of ‘delayative medicine’.

Strengths and limitations of this study